The tools that robotics developers use to design new products are just as important to performance as their choice of materials and components, according to nTopology. The New York-based software company works with aerospace, automotive, consumer, medical, and industrial design customers.

In aerospace, topology optimization is important because every pound removed from a design saves millions of dollars over the life of an aircraft, he explained.

“In automotive, we need to make sure vehicles are crashworthy — for example, with parts that are hollow and can collapse,” said Perez. “There’s a lot of interest in 3D printing solutions, but not a lot of tools to generate that level of performance.” 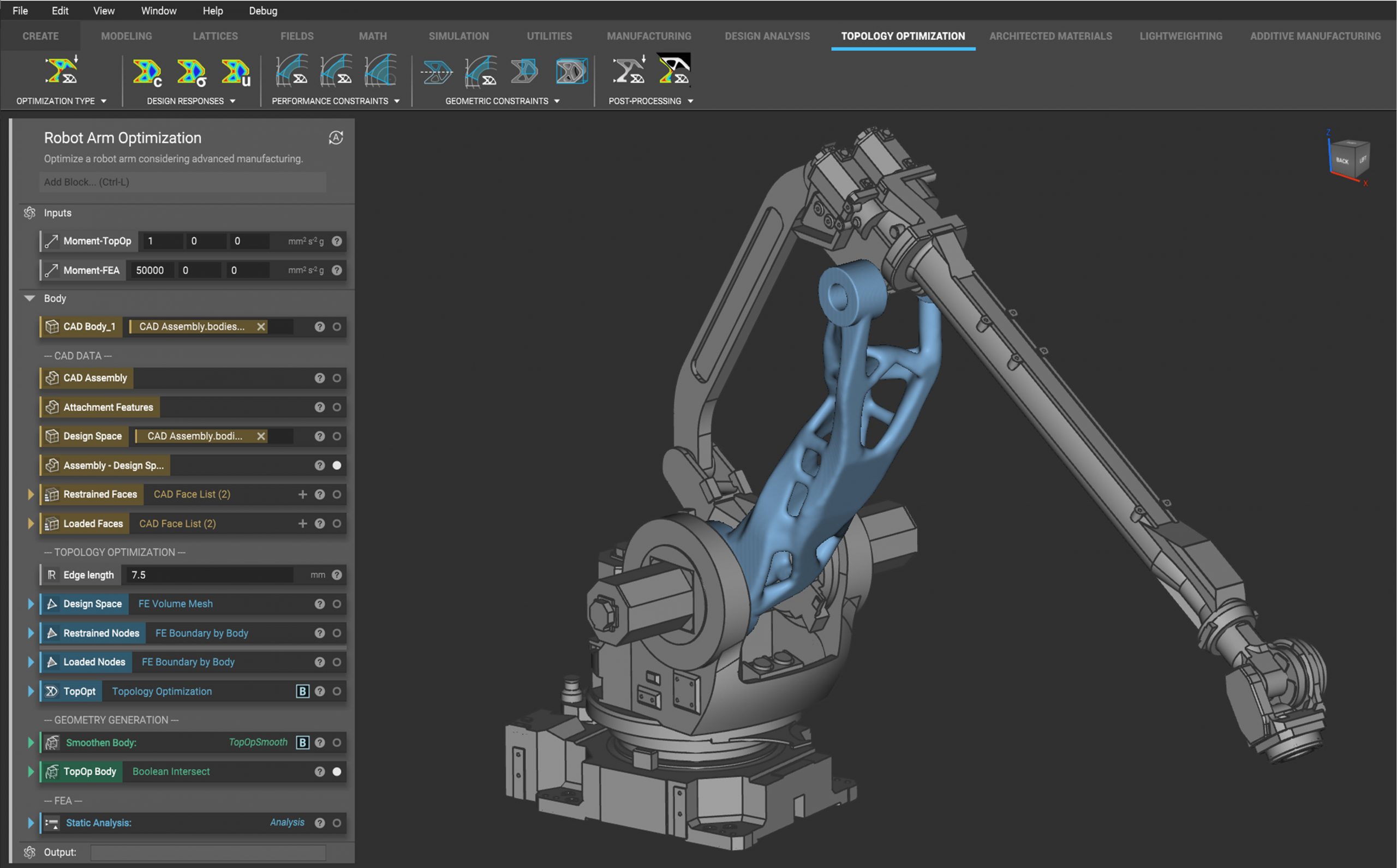 In 2015, nTopology launched its Element software, which was a point tool for creating lattices. “Customers wanted to create lattices with 1B unit cells, but the software they were using was crashing,” Perez recalled. “That led to the creation of the modeling kernel we use today. We realized it was useful for other things, revolutionizing the way we use CAD today.

“We put the first version of our nTop platform into the hands of companies like Lockheed Martin for beta testing in 2018,” he said. “The official launch of nTop 1.0 was in April 2019. Since then, we’ve been evaluating how people in different industries are using it, and that’s led to the creation of the Toolkits—for things like simulation, or architected materials—that are delivered in our latest nTop 2.0 software version.”

nTopology’s collaborative approach involves not just having an engineer in the loop, but also having the design engineer work alongside other engineers, and with simulation data, in the workspace, said Perez.

“These tasks are all computationally heavy, when done with traditional CAD-based software, and can take hours, days, or weeks to do,” he said. “Such methodology has been holding back advanced additive manufacturing. A 3 to 5mm change will break the model somewhere.”

“Our users are incredibly talented, but maybe they work at small firms and think they can’t afford all the tools they need,” he said. “However, now design and manufacturing engineers don’t have to be experts in CAD/CAM,” he said. “They can do it all within nTop platform, which is affordable for small startups.”

“We try to capture and automate a lot of work, and as people get used to building more complex models, they can automate their own model changes,” Perez said.

“The way functions interact in nTopology software has similarities to coding,” Perez said. “Because of their coding and mechatronic background, robotics developers understand it. The accessible learning curve for our software enables them to design an arm, optimize topology, and optimize for manufacturing easily,” he added. “It’s interesting to see how fast people in this space can pick it up.

“People building parts for robotics can make them more lightweight or optimize their center of gravity to make their motions more efficient,” said Perez. “They can do those performance optimizations in the software.”

nTopology users include developers working with ABB and KUKA products, among others. “Another customer is a large medical company designing robotic grippers,” he said. “We’re looking for people seeking to design things that their software can’t do yet and need a modeling approach that keeps up with their imagination.

“For mobile manipulation, I would be excited about a robot that could bring me my wallet when I forget it at home,” he jokes. “We’d like to cast our thinking out that far!”

nTopology sells its software direct to design and development firms. There is a platform fee, plus add-ons for additional users and trial pricing, said Perez.

“Customization is part of the product-development process,” he explained. “Over the past year, we’ve been busy responding to customer feedback. In most cases, we’ve then built generic pathways for smoothing interoperability between engineering data sources. nTop can work directly with Abaqus and other brands of simulation software, and it can output data as a .csv file and load it into another tool. In some cases, it can also deliver sliced data directly to a 3D printer without the need for intermediate STL files.

“Our customer-success teams offer technical guidance that enables customers to build functionality within the tool themselves. Then they own it,” Perez said. “For example, we taught a medical customer how to design its product and all the accompanying workflows, fully within our environment. We provide ongoing customer support and extensive documentation as well.”

nTopology doubled in size last year. “One of our growth pains is that we sometimes get more customer feedback than we can quickly respond to,” acknowledged Perez. “We’re in the process of continually adding functionality—such as enhanced topology optimization, and even more complex latticing capabilities—making everything more extensible and faster over time.”