Anyone who’s measured their home for a new piano or sofa can appreciate the challenges. How will it get through the door, turn through passageways and scale to the room and its contents? Now imagine measuring a piece of industrial equipment, the size of a tractor trailer, that connects to a highway of plumbing and electric cables—and the task might seem unsurmountable.

Brian Christiano faces the latter kind of scenario all the time. And since the president of BC Engineering and Design LLC in Columbia, South Carolina isn’t measuring furniture, his job is much more difficult, the stakes far higher and his customers much more demanding than those involved in any residential upgrade. His company specializes in “Building Information Modeling,” or BIM. To those responsible for planning, designing, and managing construction projects or infrastructure renovations, Christiano offers an indispensable service. 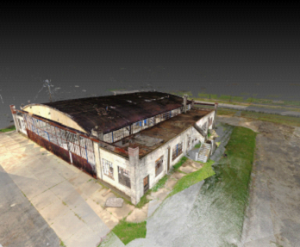 If Christiano and his team were to measure your living room, they would start by scanning it with a portable 3D laser scanner. Within minutes or hours (depending on the size of the space), a beam of laser light will have been bounced off every surface and object, from the wine rack in the corner to the dust bunnies under the loveseat, digitizing the exact location of each.

That’s when the hard part starts. For all their high-tech capabilities, laser scanners only provide a “point cloud,” a massive collection of data that someone then needs to modify and refine into a coherent, 3D model of the scanned structure’s interior and all that it contains. No easy task.

Christiano is used to challenges, however, having served in the United States Navy’s submarine force for more than two decades. Beginning in 1969 as an electrician on a nuclear-powered ship, he worked his way up, gaining responsibility as the ship’s power plant supervisor and—after getting his college degree—earned a commission as a US Navy officer. He was promoted and served as a submarine nuclear Weapons Officer on a ballistic missile submarine before retiring. When he left the military he took a job as a government contractor working out of Charleston, South Carolina. It was here that he first learned the power of 3D CAD modeling.

“Back then, everyone was using 2D design software, and a lot of the work was still being done on spreadsheets and pocket calculators,” says Christiano. “But at one point I saw a demonstration of 3-D solid modeling and finite element analysis software, and immediately realized that it was the way of the future.”

Christiano grabbed the 3D ball and ran with it. He formed BC Engineering soon after, leveraging what he discovered that day as the premise of his newfound company. “Everybody was reluctant to change over from their 2D systems. So when the opportunity came to go into business for myself, I thought that would be a good niche for me. Not long after, I was awarded a contract to assist on the Trident submarine retrofit.”

On the Trident submarine project, Christiano mapped out the ship’s communications room by manually measuring the various surfaces and then drawing them in 3D space. It wasn’t long, however, before he replaced his plumb bob and tape measure with a laser scanner. BC Engineering quickly became known for its expertise at virtual modeling and finite element analysis, reverse engineering, machine design and, more recently, aerial drone inspection services.

Fast forward twenty years. The company’s completed project list is now extensive. Among its hundreds of industrial structures and many thousand laser scans, BC Engineering has also scanned the Church Brew Works in Pittsburgh, South Carolina’s 1740 Litchfield Plantation Home, the Columbia Canal Power Station, and the Curtis Wright Hangar at nearby Owens Field (where Christiano can be found flying his airplane on the weekend, if he’s not too busy scanning iconic buildings). In each case, he and his team took dozens of images from which the building structures were tediously reconstructed.

“Tediously” is an important word to note. Even though laser scanning makes it relatively easy to collect the millions or perhaps billions of data points used to describe an object in three-dimensional space, how efficiently one can process that information is largely what determines any project’s profit margin and client cost. 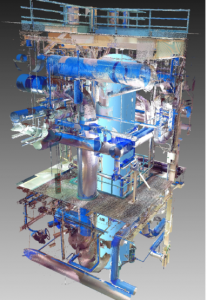 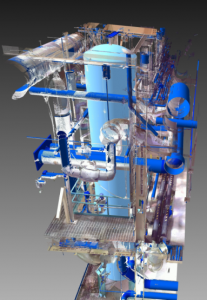 Images 2a and 2b. With InfiPoint’s robust import/export capabilities, CAD to point cloud and point cloud to CAD comparisons are easily done.  Shown are combination CAD and point cloud from two different angles.

In BC Engineering’s case, an elaborate workflow had been developed over the years to turn that nebulous point cloud into a usable 3D model. It started by exporting the raw data from the laser scanner, verifying its accuracy, then slicing the point cloud at various locations and extruding the cross-sectional profiles of the pipes, beams, walls, and other objects found within. Six separate software packages were required, as well as plenty of manual intervention by the CAD operator in an attempt to determine what’s what in the point cloud. Hundreds of hours were spent tying virtual structures together, filling in gaps between architectural members, and reconstructing ghostly walls, floors, and ceilings.

Worse, several of the disparate software packages used were slow and unreliable, prone to routine crashing. This caused vast amounts of rework as well as employee frustration. Software upgrades across multiple platforms were difficult, often resulting in incompatibility between different systems. Some improvements were made when the scanner manufacturer released a software version with “smart look-ahead” capabilities that automated part of the workflow, but the process was nowhere ideal.

The situation came to a head one day when Christiano realized that their cumbersome methodology was causing them to miss out on new opportunities. “We weren’t necessarily happy with our old way of doing things but it did get the job done,” he says. “And then a potential client called to ask if we could do a travel-path analysis for a large heat exchanger that they were replacing. This meant scanning the equipment and its surroundings and determining the best route for the riggers to take when removing the old exchanger from the space. Long story short, the other company could do it and we couldn’t. That’s when we started evaluating InfiPoints®.” 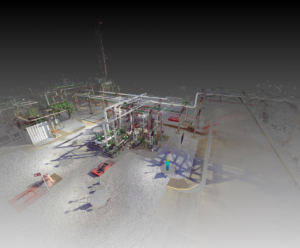 Image 3. Automatic data point registration and bundled adjustments of scan positions of this typical pumping station with piping and supports took only eight minutes with InfiPoints.

InfiPoints, from software provider Elysium Inc., Southfield, Michigan, is a “point cloud utilization” tool that offers data import, pre-processing and analysis, CAD modeling, and a host of other functions previously unavailable to BC Engineering and Design. These include “fly-through” (video1, video2) capabilities that allow customers to take a virtual tour before construction begins, automatic mesh generation and feature recognition, noise reduction (for removing people and other moving objects found in the point cloud), and real-time collaboration tools. It also provides those much-needed travel path calculations.

“In the case of the power plant job, the heat exchanger was roughly four stories tall and 18 feet in diameter,” Christiano explains. “It was not only a matter of cutting it and removing it, but they had to figure out if the floors needed to be reinforced, how much the cranes had to lift, and then model everything on the 35-year old exchanger so a new one could be built to fit the existing space.”

If they’d had InfiPoints in their arsenal when bidding on the job, BC Engineering could have virtually rotated any object, laid it down, twisted it and turned it however they wanted, with the software identifying any impingement on a defined clearance envelope. “I’ve since called the owner of that company and told him that, when the next job comes up, we can handle the entire package,” Christiano says. “InfiPoints has brought us to an entirely new playing field.”

It’s more than additional functionality, though: InfiPoints has also dramatically increased the company’s efficiency. For engineering team leader Tommy Maddox and his group at BC Engineering, it’s been a game-changer. “The automatic feature extraction has been one of the biggest improvements for us,” Maddox says. “Before, you could literally spend weeks and in some cases months on the legacy software, modeling each element in space, one at a time. With InfiPoints, all of the available elements are extracted automatically in less than an hour, and we can get to detailed modeling right off the bat. It’s made a night and day difference to our throughput.”

A more recent example of this was BC Engineering’s work on a paper mill project. Because the 10-inch diameter pipe used by the mill had a black matte finish, the laser scanner was unable to pick up certain areas. This resulted in the legacy software being unable to recognize it as pipe, requiring the engineer to manually draw each length. InfiPoints, however, was able to extract the pipe with ease, as well as the surrounding conduit, railings, electrical boxes, walls and floor, saving the team countless hours of modeling effort. 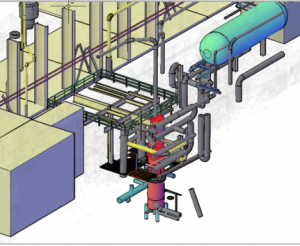 Image 4a and 4b. With one of BC Engineering’s legacy CAD tools, modeling of this power plant feedwater heat exchanger took more than 400 hours (right image). InfiPoints extracted the relevant data in 19 minutes, leaving engineers with little more than minor cleanup work (left image).

“The pipe in that example cost $500 a foot, so buying the correct amount was a big concern for our customer,” notes Christiano. “The plant was so old and the pipe so corroded that they weren’t sure how much they would need. We went out, spent a couple days scanning the entire plant, and were quickly able to give them accurate numbers. Not only that, but we provided a 3-D model with all the valves, flanges, and fittings, as well as a 2-D pipe layout that they’d never had before. They were quite pleased.”

As mentioned earlier, InfiPoints has also allowed the team to drastically simplify their workflow. What were once six separate software packages are now two, and in some cases InfiPoints can do the entire job on its own. Considering the additional functionality, they’ve gained, BC Engineering estimates that an additional three software packages would have been needed to achieve the same functionality on the old system.

There’s also the IT aspect to consider. The company no longer must manage multiple software packages. Labor and software maintenance costs are reduced. Training time for each new release has fallen and is no longer a concern. And best of all, there are no more crashes.

“We save time, we save money, we can tackle bigger projects, we have a lot of extra capabilities, and we eliminated a huge number of headaches,” says Maddox. “For a while we were getting eight to ten crashes a day, no matter how much computer hardware you threw at the problem. That’s pretty awful for employee morale, never mind the lost productivity. If you’re doing BIM work like we are, you should definitely be using state-of-the-art software.”

Christiano agrees. “InfiPoints allows us to import from our scanning system, or from scans provided to us by others, without any additional tools. We can export to any number of CAD packages. We can do travel paths, and fly-through videography, and collaborate better with our customers. We were unable to do any of that before. All that, and there are no more surprises. When you’re in business for yourself, you must think long and hard before upsetting the apple cart, but this is one instance where I’m very glad I did.”