Image 1a & b. After numerous no-bids by various service bureaus and metal additive equipment manufacturers, KW Micro Power’s microturbine component design (left), dubbed “the spaceship” for obvious reasons, would likely never have been built (right) without help from VELO3D.

Whether it’s for the portable generator that keeps the refrigerator cold and the light bulbs lit during a power outage, or the hybrid-electric engines that can lift delivery drones high into the sky, the world needs compact and reliable energy sources. Making them smaller, more powerful, and especially more affordable is the vision of Enrique Enriquez, president of KW Micro Power.

Over the past four years, Enriquez has worked tirelessly in pursuit of his company’s goal: a microturbine generator roughly the size of a microwave oven that can crank out more power than systems ten times as large. He ran into some major roadblocks while attempting to manufacture one of the device’s key components and considered scrapping its design and starting all over. But the SupportFree metal powder-bed 3D-printing technology from VELO3D turned out to be the ultimate solution that got him back in the running for a commercial launch by early next year.

Enriquez attributes a lifetime of career success to being in the right place at the right time, and this latest example is no exception. As a young engineer, he was there during the early days of computer-aided design and manufacturing (CAD/CAM), giving him a front row seat to one of the more notable developments in manufacturing history. His employer at that time—turbofan aircraft-engine manufacturer Rolls-Royce—trained and mentored him on this and other technologies, ultimately leading to his assuming management of the company’s engineering systems department.

He was a member of the Reagan-era Star Wars project. He worked with the Defense Advanced Research Projects Agency, or DARPA, developing propulsion systems for drones that were yet to be invented. He bought the second 3D-printer ever built by Stratasys, and one of the first wax-style printing machines from Sanders Prototype. Simply put, Enriquez has been around the manufacturing block. “I’ve been at the leading edge of technology pretty much all my life, a journey that I like to think of as the yellow brick road to success,” he says. 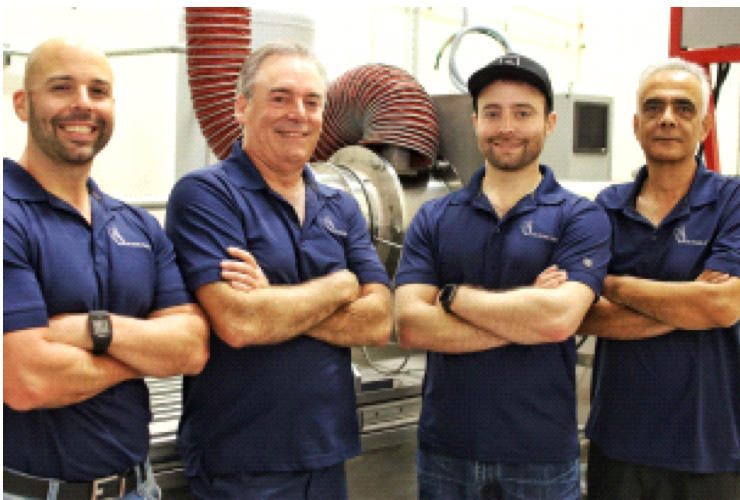 Image 2. KW Micro Power president Enrique Enriquez (second from left), with some members of his engineering team, in front of the test rig for their microturbine combustor.

He’ll also tell you he’s a 16-year old in a 60-year old body, which is why he was so excited to find a kindred soul in Zach Murphree, vice-president of technology partnerships at VELO3D. “Zach was probably more excited than I was when I first showed him my design,” says Enriquez. “I never thought I’d run into someone crazy enough to help me the way he has. It’s been a great relationship since the start.”

That design has since been dubbed the “spaceship,” and not only did Murphree build the part for Enriquez, he helped him improve it significantly. The component is an unassuming titanium disc roughly 10-inches in diameter and 4-inches tall, whose interior contains a complex labyrinth that channels exhaust gases far more efficiently than conventional systems. It is the heart of KW Micro Power’s turbine technology. 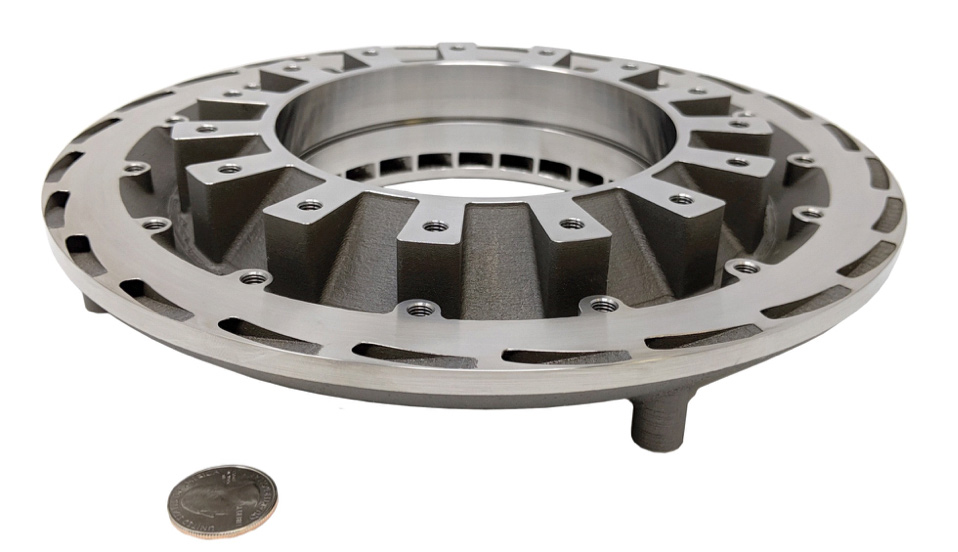 Image 3. Flip-side of the “spaceship.”

It was also the system’s Achilles heel; until he connected with VELO3D, Enriquez was unable to find anyone willing to make it for him, and was turned down time and again by 3D-printing service bureaus and machine builders alike. It wasn’t until he attended IMTS 2018 that he discovered a company willing to work with him on his project. “I was talking to a friend of mine there about the problem, someone very knowledgeable about 3D printing, and explained that everyone was telling me it was impossible,” says Enriquez. “He said, ‘Enrique, go talk to the folks over at the VELO booth.’ So that’s what I did.”

The challenge no one else would take on was the microturbine’s internal channels. Most additive manufacturing technologies, and especially those that print metal, require a series of scaffold-like supports to keep the workpiece from drooping and warping during the build process. Though expensive and time-consuming, it’s accepted industry practice to machine or grind these supports away post-build. This can’t be done with small internal features, however, something that Enriquez’ “spaceship” is chock full of.

“Zach agreed to give it a try,” Enriquez says. “He even did it on VELO’s nickel. He came back with a test piece shortly after the show and said he could pull it off, but then offered to take the design much further. A few weeks later, he delivered a redesigned ‘spaceship’ that leverages every feature needed to keep the design functional, but at the same time is built around the bare necessities. It’s just a beautiful part.” Looking forward to a 2020 commercial launch, Enriquez is planning a selection of prototypes and already has interest from two companies, one in the drone business and the other in the directed-energy (laser/microwave) business. 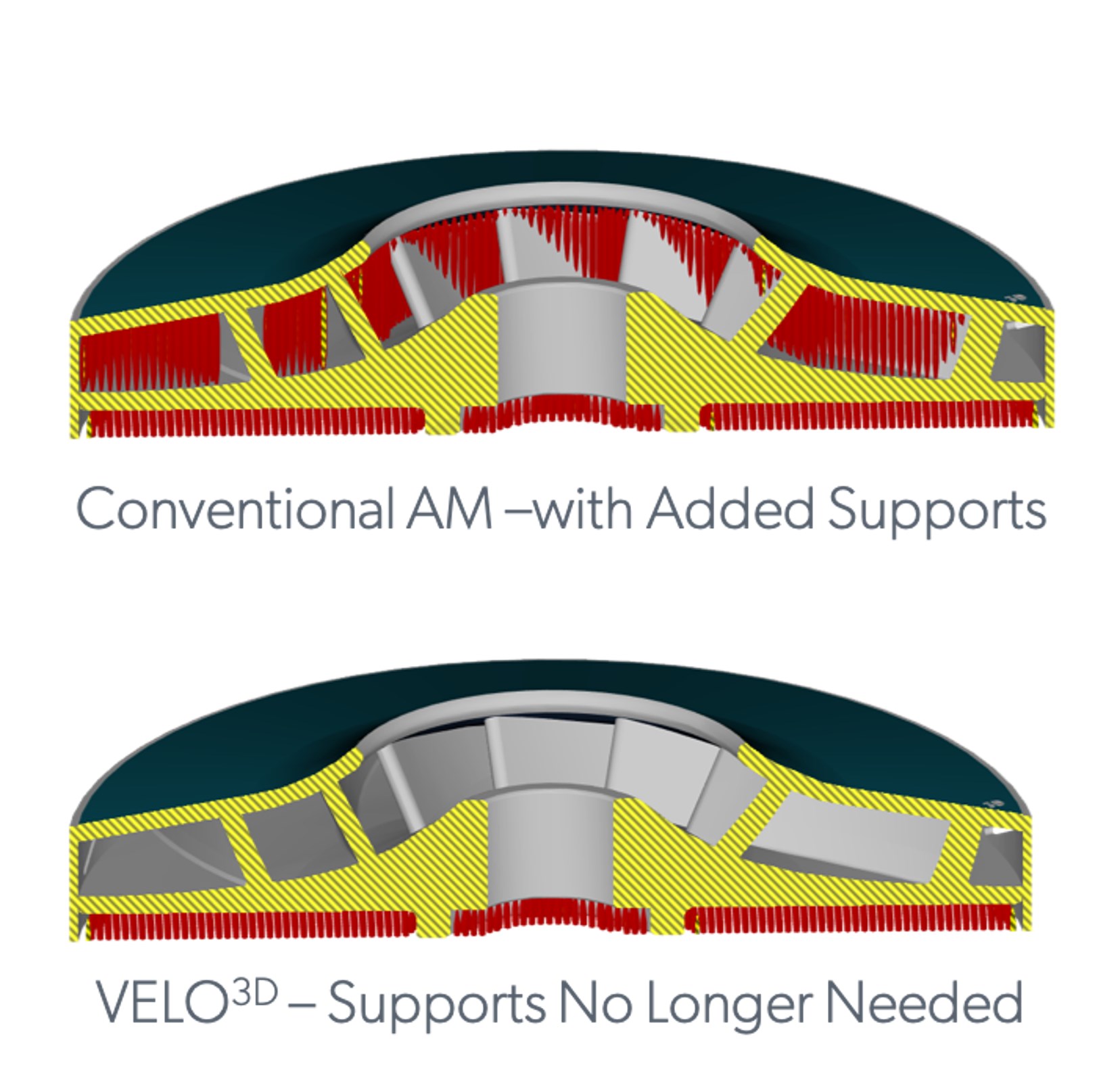 Image 4. Before (above) and after (below) images of a shrouded impeller illustrate how VELO3D eliminates the need for supports (in red) during the 3D-printing process.

How was VELO3D able to build a product that got a “no-bid” from every other metal additive machine builder Enriquez approached? “Our company was founded five years ago by people who are from the semiconductor industry,” Murphree explains, “so the initial focus was on developing a process with that same high level of rigor and control. We also wanted to produce a machine that’s able to print parts and features that nobody else can. This was the genesis of our Sapphire 3D-printer and its Flow build software.” 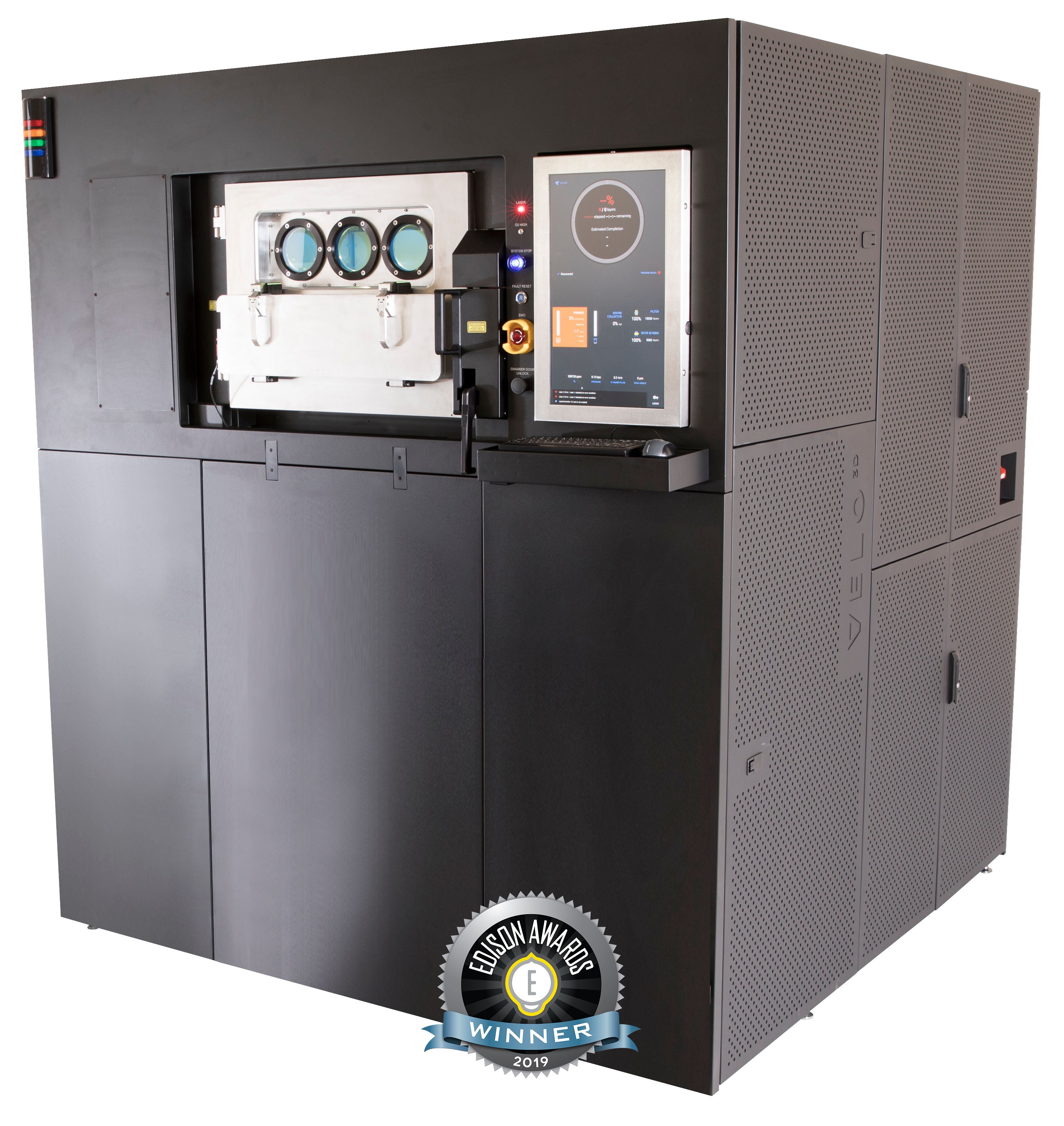 Image 5. Advanced features in VELO3D Sapphire printer include closed-loop melt-pool control, feature-specific processing, and a non-contact recoater, all of which help to reduce internal stresses in metal 3D-printed parts. The system received a 2019 Edison Award.

The specifics of what makes VELO3D different are proprietary and the company has applied for more than 90 patents on its technology. Murphree is willing to share several key differences between Sapphire and other metal powder bed printers, however. The first is its SupportFree technology that provides the ability to print near-horizontal surfaces without supports; most printers can’t print features support-free if less than 45-degrees from level. This helps fulfill 3D printing’s mantra of “unlimited design freedom” for Sapphire-produced parts. There’s also a non-contact recoater, which virtually eliminates the build crashes and contamination that may occur when a traditional recoating blade drags across the top of a burgeoning workpiece.

Image 6. On the left is a cross-section of a stator ring. Note the red areas, which indicate deformation during the 3D-printing process. The part on the right shows how VELO3D’s Flow software predicts and eliminates this deformation, providing a far more accurate part.

Another significant difference is the use of feature-specific processing. Where most machines use the same laser power, traverse rates, and other build parameters across an entire part layer—and often for the whole build—Sapphire can apply more than 20 geometry-dependent “recipes” to specific sections within each layer. The result is less metallurgical stress, greater part accuracy and faster build times. And to make sure that all is going according to plan, Sapphire comes standard with advanced metrology to assure quality and reduce variability.

It’s this consistency that’s perhaps the biggest differentiator, notes Murphree, an attribute that goes back to the company founders’ backgrounds in the semiconductor industry. “We’re controlling everything much more tightly than anyone else out there,” he says. “For example, we can precisely define how much energy is applied anywhere within the build, which is a large part of the reason why we’re basically support-free. We’re able to calibrate and align the lasers at each layer if that level of precision is necessary—our competitors generally do it at the beginning of the build, or sometimes every couple months. There’s also the enhanced atmosphere control, the quantitative metrology behind the powder bed and recoating system…there are many significant architectural differences between our system and others that allow us to operate within this extremely small process window.”

It’s also what allowed Murphree and his team to print the perfect “spaceship” on the very first try. “Between the software, the hardware, and the process control, we enjoy a much higher success rate than the industry overall,” he says. “In many cases, it’s up around 90% first print yield. And that saves companies a ton of time. Instead of doing four iterations over six weeks, we might deliver the first iteration in one week, as we did for KW Micro Power. I don’t care what you’re manufacturing—that’s a pretty significant cost savings, never mind the reduction of development time.” 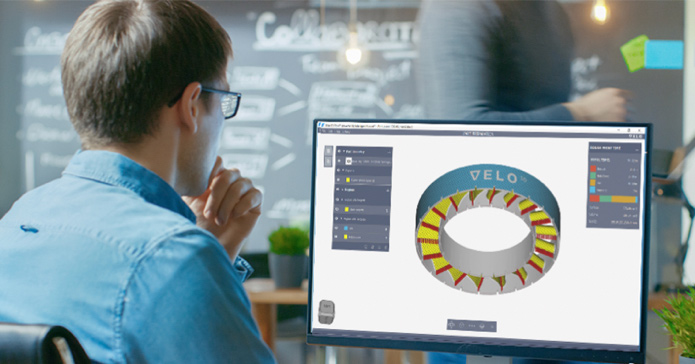 Image 7. Flow software from VELO3D simulates and optimizes all aspects of the entire build.

Software — that essential component of any additive manufacturing process — has a significant role in the fight for higher print yields. VELO3D’s Flow™ software simplifies print preparation while preserving design intent. It accurately simulates the entire build, analyzing, displaying, and correcting for potential deformation long before the laser ever lights up. Similarly, its composer function optimizes each layer, detecting part geometries and applying the feature-specific processing methods described earlier. The outcome is typically first part, good part.

With the “spaceship,” this would have been practically impossible, even if the other additive providers hadn’t turned away from the project. That’s because the Ti-6Al-4V alloy Enriquez chose for his microturbine component can be a challenge to work with.

“Titanium’s a pain in the neck,” Murphree says. “Thanks to all the internal stresses that typically build up with laser sintering, it likes to crack—in the worst case, the part essentially tears itself to pieces or rips itself away from the substrate that you’re printing it on. And the bigger the part, the worse it gets—in 3D-printing terms, the ‘spaceship’ is relatively massive. We knew this going into the project and built in some additional time—but our ability to manage the stress inherent to printing large Ti parts was clearly demonstrated with that successful first print.”

Enriquez was pleased, and even a bit surprised, by the result. “With small engines like mine, efficiency is hard to achieve, and I knew I would have thrown much of that away if I’d had to adopt a more traditional design,” he says. “But to be honest, I never expected that VELO3D could pull it off. I’m delighted to say that I was wrong. Not only did they print my ‘spaceship,’ they made it even better. It’s 37% lighter than when I started, the performance is better due to reduced stresses, it’s clearly manufactureable, and I now have a business partner I can count on. What more could I ask for?”