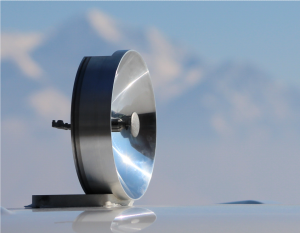 Image 1. Extreme parts consolidation of antenna systems enables reduced size, weight, lead time and cost while boosting RF performance. Shown is an aircraft antenna with reflector (bowl shape), an antenna feed (running horizontally through its center), and an Ortho Mode Transducer (protruding through the rear). The latter two were optimized by designing them for 3D printing.

The engineering team at Optisys can take an antenna assembly that has 100 parts and consolidate them into just one by specifically designing the product for metal additive manufacturing (AM).  CEO Clinton Cathey calls the results “single-piece assemblies.”

“There’re not many companies like us that are designing products to take full advantage of AM,” says Cathey. “Designing antennas for 3D printing requires a new way of thinking about structures. The early adopters for 3D printing made just prototypes and tooling—and that mindset is still pretty widespread. But we formed our company by identifying a niche market where 3D printing is the production method from the start.  We’re solving end-use challenges with it.”

This spring, Optisys released metrics demonstrating the savings possible in weight, time and costs through parts consolidation. The example was a Ka-band monopulse tracking array; the company is developing a full line of customizable antenna feeds and other antenna products, and they delivered their first commercial products to a customer this summer. 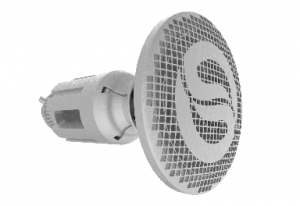 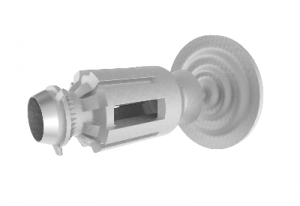 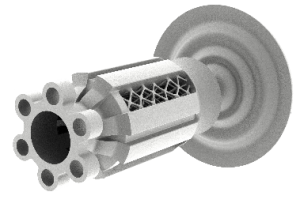 Image 2. Examples of 3D-printed metal antenna feeds customized by Optisys and produced in their Concept Laser AM machine.

An opportunity to fill an industry void

“We had the total package for generating full antenna systems—and with our experience in AM we saw the potential to put everything together to fill a void in this niche market,” says Smith. 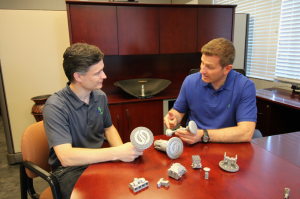 The team felt that the AM industry as a whole had a weakness in terms of value-added engineering. “We realized we could be the turnkey provider that adds pre- and post-processing to meet exact customer specifications,” Smith notes. Agrees Cathey, “There are certainly plenty of companies that know how to do design, that know how to 3D print, but there’s a lot of throwing things over the wall between them. You end up with parts that are intended to be machined, or designed for traditional manufacturing methods, that don’t take full advantage of 3D printing.”

The ability to consolidate parts with AM was what sparked the idea to form Optisys, says Smith. “We had a high degree of intuition that 3D printing would solve many of the problems we’d been fighting in our past experiences with antenna manufacturing,” he says. 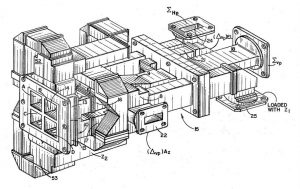 Image 4. Complexity that can affect RF: Drawing of a metal antenna system to be manufactured according to traditional methods. The antenna horn is represented by the four square holes at left.

Those problems add time and money to traditional antenna manufacturing, as there are often a huge number of parts in a conventional design: typically a daunting array of 100 or more individual metal components—including the hollow, rectangular waveguides so critical for channeling the electromagnetic energy carrying the data—that are joined together via brazing, plunge EDM and/or multiple bolted joints.

Such assemblies can be large and long with unique shapes creating internal geometric hazards that can interfere with the flow of the very data the antenna is supposed to convey. “Every single joint, seam, or fastener creates the potential for a discontinuity that can result in RF losses as the signal travels through the antenna,” says Smith. “Even how tight you make the screws can add a lot of variability to this insertion loss: if you don’t do it exactly right you can end up with an inadvertent antenna at each of your seams.”

Tolerances can also be an issue when a hundred or more parts are joined together, Smith points out. “When you have the kind of complicated system you get with a traditionally manufactured antenna assembly, you have to inspect each piece part independently, then put them all together and hope it translates to better overall RF performance,” he says. “The tolerances of each part have to be very, very exact and by the time you integrate so many pieces together you can have significant tolerance stackup and be completely off target.” 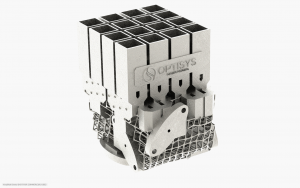 3D printing, by contrast, supported the type of systems-engineering approach that Optisys envisioned for building their business. By viewing an antenna assembly as an integrated structure in which all the parts are combined into a single functional one, they realized they would be able to reduce lead times from months to weeks, cut size and weight dramatically and improve costs to their customers.

“Of course we did testing to validate our assumptions, and took parts to customers to get their responses and then tested for answers to their questions,” says Cathey. “But we had already done enough internal testing to convince ourselves that we were onto something.”

The biggest “something” they identified delivered the most convincing value proposition to potential customers: the smaller size of their additively manufactured products greatly shortened the overall distance that an RF signal had to travel within the system—a huge benefit to antenna performance.

Extreme accuracy is not necessary for, say, a car antenna, which picks up signals from 360° around the vehicle. But directional, microwave antennas—used for most satellite and line-of-sight communications, aircraft and UAVs—operate in the 1-100 GHz frequency band. In those industries, light weight is highly desirable.

“We found a sweet spot for 3D printing where the technology provides many benefits and is also economically advantageous,” says Cathey. “With our Ka-band monopulse tracking array we tested RF frequencies to 30GHz, which is much higher than anyone else was doing; other companies have only reached 5-15 GHz.” As with all their products, the Ka-band array was evaluated for both bench and outdoor RF range performance. Similar designs have passed rigorous vibration testing for “military ruggedness.” Subsequent Optisys designs have reached up to 50 GHz in RF capacity. 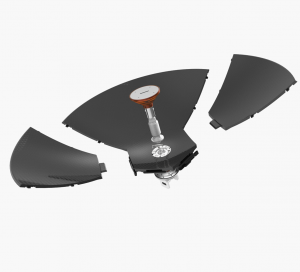 Image 6. Optisys makes antenna feeds like the one in the center of this segmented antenna. The black reflector shown, made by a partner company out of composites, completes this lightweight antenna intended to disassemble and fit into a soldier’s backpack.  This feed (long structure in the middle) includes a 3D printed polarizer that is cost effective and lightweight.

Optisys’ Concept Laser metal AM machine provides the build quality to achieve such results, Smith notes. “I’ve been very happy with their fine resolution, their nice surface finish, the superior human-factors element of working with these printers,” he says.  “We felt confident that we can meet the type of feature resolutions that we need with them.” Aluminum is the material of preference for a build; it stands up better than plastics to environmental stresses, from ground level to outer space, and has essentially the same properties as a solid piece of the same material.

So you might say that the final 3D printing process is the easiest stage of Optisys’ systems-engineering approach to antenna production. How do they come up with their best designs to go into the printer?

“We designed for metal AM with the process in mind, right from the start,” says Smith. “This lets us take advantage of all the best aspects of 3D printing, while recognizing its challenges and designing around those.”

Rather than start from a pre-conceived geometry, Optisys begins with the RF requirements that are desired for the finished product. “Because AM promotes parts consolidation, we have the freedom to work towards the goal of optimum RF output rather than derived requirements such as individual part tolerances,” says Smith. “Your typical 3D printing service bureau doesn’t have the RF expertise to achieve the requirements, so passing inspection is a challenge because the critical geometry is internal and can’t be measured directly. Using AM, we can avoid internal geometry issues and deliver the lowest insertion loss and the highest RF possible for each design.” 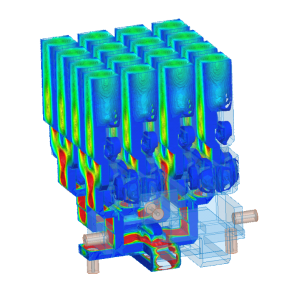 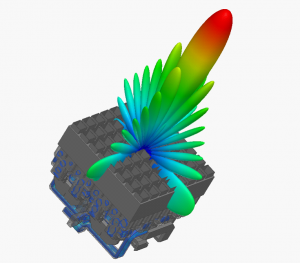 For the next step in Optisys’ process the group’s RF expert, Mike Hollenbeck, develops a microwave simulation using Ansys HFSS software to model the high-frequency electromagnetic field inside the air cavity of the proposed array. Explains Smith, “Mike and I go back and forth a bit to identify the air-cavity design that best meets our requirements, then I import that file into SolidWorks to figure out the optimum wall thickness for the aluminum walls that I’ll ‘wrap around’ that air cavity in order to create a design that can be printed out as a single metal assembly.”

At this point Smith uses his experience and intuition to create the ideal topology of the design, adding just enough extra material where needed to create an integrated unit that will print consistently. He also adds support structures for those features that merit them, using Autodesk Within, and merging the result using SolidWorks and Magics. “These integrated support structures stabilize the geometry throughout the build, draw the heat away so we don’t get stress concentrations in shrinkage locations, and then provide the entire system with support when it’s in operation,” says Smith. “They also happen to look pretty cool!” 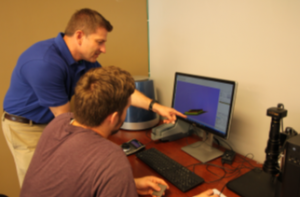 Benefits beyond the build

The final design is transferred into Concept Laser’s proprietary manufacturing software, which drives the LaserCUSING® process in the AM machine.  And the advantages of 3D printing carry forward, Smith points out. “By consolidating parts you’ve already designed out assembly and rework. You can easily tweak an existing design with new features. And components with fewer parts require less maintenance and service over time.”

With a number of patents pending and discussions progressing with leading aerospace companies and academic institutions about expanding their portfolio of antenna-product lines, Optisys is, well, optimistic about business growth. “Our competitive advantage is the integration of systems engineering, design and additive manufacturing—customized for this niche application,” says Cathey. “We haven’t even pushed the RF boundaries as far as they can go yet so metal 3D printing will continue to be pivotal in getting us there.” 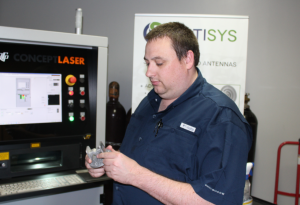 He has some advice for others looking to capitalize on AM technology: “I highly encourage people to look closely at 3D printing and find other niche markets in which to apply it from the very beginning.  There’s still a lot to be achieved there.”